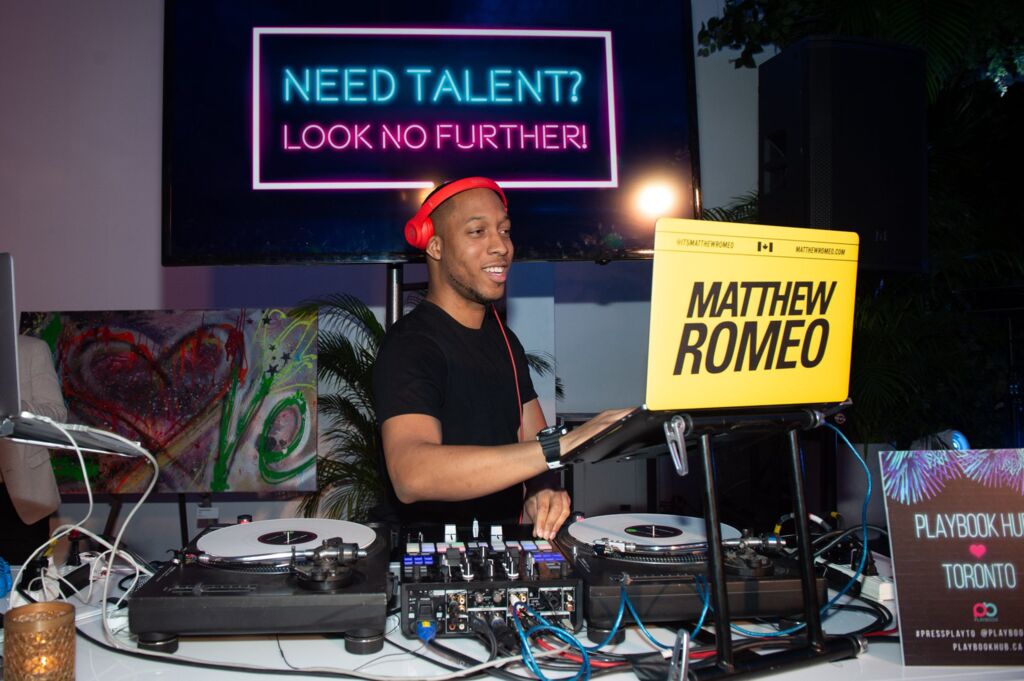 Matthew’s career trajectory over the last few years has been nothing short of extraordinary, as he’s quite literally gone from rags (at the age of 18, Romeo experienced a bout of homelessness when he moved to Toronto from Windsor, Ontario with $1.11 and two bags of clothes) to newfound DJ notoriety and online success (he’s a social media phenomenon with almost 100k Instagram followers).

To create the life he envisioned for himself in the entertainment industry, Matthew got his start selling bootleg CD’s and mixtapes at 13 years old while receiving music business mentorship from Detroit’s leading mixtape DJ and official Shady Records tour DJ Young Mase. By the time he moved to Toronto and began volunteer DJ’ing on CIUT’s 89.5 FM Masterplan Show – the longest running hip-hop radio show in Canada – taking the necessary time to practice and master his DJ skills, quickly earning the respect of fellow DJs, artists and celebrity figures. During this time, his talent and ambition was rewarded when he became the first and only Canadian member of the Demolition Crew DJs – a group of A-list DJs who work in tandem with NYC’s legendary Grandmaster Flash – and began making a number of special guest TV appearances on MTV and the popular CW Television Network series Nikita.

Fast forward to today, and Matthew has become the go-to DJ for a who’s who of the music, sports and entertainment industry, boasting a wide and extensive list of clients including; the Toronto Raptors, Toronto Blue Jays, NHL (National Hockey League), Pan Am Games, and Grammy winning rapper Drake’s annual OVO Bounce celebrity basketball tournament (where he’s the official DJ) all the way to Microsoft, Ubisoft, Coca-Cola, Pepsi, Red Bull, BioSteel, T.I.F.F (Toronto International Film Festival) and Bell Media. When he was asked to DJ at the G.O.A.T Michael Jordan’s NBA All Star Weekend birthday party bash and for the launch of the only Jordan Brand store in Canada, it further cemented what music audiences have been feeling over the past few years. It’s Matthew’s rare ability to DJ across multiple genres, based on the clients needs, with incredible dexterity which is what continues to draw the attention of today’s music enthusiasts, audiences and listeners who are looking for something fun and unique.

Recently handpicked as one of 33 Canadians featured in the 2017 book Glorious & Free: The Canadians (Ambrosia / House of Anansi) alongside supermodel Coco Rocha and 2016 Olympic Games triple medalist Andre De Grasse among others, Matthew’s legend continues to grow at a dizzying pace. Don’t let his ear-to-ear smile and gregarious nature fool you – when it comes to DJing, this is an artist who takes his craft very seriously. When he’s not performing at events, he’s discovering new music, practicing his skills, and recording mixes. DJing is more than just an obsession for this young influencer – it’s a way of life. What has always separated Romeo from the DJ pack are his precise live music mixes and the high-energy he demonstrates at every show he plays. Not only does he play great music, but he performs it.

2016 was a breakout year for Romeo as the buzz surrounding his unmatched DJ skills and high energy live entertainment experience began to spread quickly. He was offered opportunities to grow his international audience and brand by co- hosting Sway in the Morning’s first international broadcast during NBA All-Star Weekend on Sirius XM, and by headlining Samsung’s C.E.S (Consumer Electronic Show) launch party in Las Vegas’ Palms Hotel. Matthew also began getting booked to play numerous private celebrity parties, high profile music venues and large music festivals throughout North America including Webster Hall (NYC), A3C (Atlanta), Wayhome (Oro-Medonte), NAMM (Anaheim) and NXNE (Toronto). His celebrity guest appearances in the film and TV world also grew, with him appearing as an onset DJ for Warner Bros. block-buster Suicide Squad movie. Romeo also became the brand ambassador for E&J Gallo Winery’s New Amsterdam Vodka and throughout 2017 began touring with the brand across Canada. This year is shaping up nicely as Matthew joins the European tour of rap icons Main Source that celebrates the 25th Anniversary of one of the greatest rap albums of all time, Breaking Atoms.

Today Romeo invites his followers to keep up with him through his Vlogs on YouTube in which he shares what goes on behind the scenes of the high-profile events he DJs while giving viewers an inside peak at the real life of an Influencer. Having already worked with non-profit organizations like The Boys and Girls Club and United Way, Matthew is pursuing a number of philanthropic endeavors and wants to use his past challenges and the relationships he’s gained as a celebrity DJ to inspire other people to fulfill their dreams, while developing his brand, travelling and reaching his fans around the world.

Your cart is empty